10 parents, 14 children and one long weekend. In my world that’s regarded as outnumbered. It can also be a little stressful when walking the tightrope of a luxury travel writing assignment, navigating the chicane of parenting – and the treacherous tasks of feeding and discipline – and generally being a relaxed likable member of the human race with your friends.

Penhill Farm is within the Perfect Hideaways stable, South Africa’s leader for short-stay luxury private retreats. It’s a little different to many of the properties they have in the portfolio because it offers multiple residences in the one location, a four bed Manor House, and then four separate two bedroom cottages – Fruit Barn, Pepper Tree, West Grange and East Grange – on the same smallholding, each with DStv and DVD player. As we arrive, the kids pile out of cars, descend on each other and promptly disappear. The central hub for them, aged 4 to 14, is the tennis court, as they gather, talk, laugh, share stories, play tennis and run laps on their scooters. It’s an organic DIY Kids Club. By contrast in energy, the parents settle in a sunny spot, open some wine and an endless flow of light or thoughtful conversation commences.

The Manor House is taken by Mike and Jean and her family and is centrally situated on the property, with an adjacent house that has a large lounge, dining room, bar and industrial kitchen. Every meal is prepared there, with a roster of which family takes which meal, and it’s a communal effort as people pop in to help the designated chef. If not anything else, to bring a glass of wine. Outside a covered stoep allows the sun to flood in on striped cushion benches and lazy afternoons are spent chatting, napping and alternating in between. In the evening the braai sparks into gear, and the chat bounces between mountain biking, birding, kids and schools, business and some or other humour found on the internet. Inside the fireplace roars and long tables of diners and second helpings accompany a DVD movie in the main lounge. We stay in The Fruit Barn, a modern two bedroom farm cottage with its own kitchen, lounge, fireplace, and pool. Mornings are spent with tea and rusks around the fire as young visitors from other cottages pop in to collect their friends for a tennis court rendez-vous. It’s immaculately clean, well serviced and well equipped. In fact, it’s the unanimous declaration among the five couples that the entire property wants for nothing, none of those missing firelighters or braai tongs which put a stick in the spokes of seamless hospitality. A large dam sits relatively close to the manor house, and as a fan of cold water swimming, I quietly sneak off for a few mid-winter sub-10 degree laps each day. Brrrrr. But for the most part, no one else considers it an option until the last afternoon when the kids catch onto my elusive move and I dare them to join me, to a clamour of noise and racing to get costumes and shorts, with five of them braving the cold, fearfully leaping off the deck into the unknown. If that weren’t enough, the group then race off shivering to jump into the Manor House’s magnificent ribbon stone clad swimming pool which is equally icy. And then onto the jacuzzis at East Grange and West Grange for a final reverse shock to the system. Freedom and fearlessness come easier to kids. Each day a run and mountain bike group sets off around 6.30am, and the bikers notch up an 80km route on Strava, the cycling app, which they rate highly, while equally berating the coffee of the local farm stall they stop at.

Before lunch, an expedition goes out for the keen (read ‘fanatical’) birding family. The hike is circa 10k and the party is nearly 15-strong. Different characters show their competitive streak as they run ahead, while others lag behind chatting and talking about life, the universe and everything else. We descend into Saggy Stone, a local craft brewery where we convene for pizza, beer and a jungle gym, accompanied by some live music. After a 10k hike, there’s a much-appreciated shuttle trip home with the moms. PenHill Farm, owned by Gareth and Kate Penny, is fortunate to be a part of Conradie Penhill Artisanal Wines, a boutique winery based at the foothills of the famous Langeberg Mountains in the Nuy Valley, led by the award winning, fifth generation winemaker of Conradie Family Vineyards Private Cellar, C.P. Conradie. Intermittently sampled throughout the weekend, the Penhill range consists of four blended varietal wines, two premium white blend wines and two premium red blend wines.

PenHill can be booked just as a single house, or for large groups like ours, and while I can’t speak for going solo as a family, I can say that there were no fall outs or early departures. To the contrary, there was an interchangable rhythm of things to do and places to relax, and hours of outdoor action to tire the kids and keep them a safe distance from their digital devices, at least until evening. That’s victory and the almost non-existent altercations are testament indeed. Make no mistake, winter can be chilly and limits the pool and dam activity for most, but we were fortunate with blue sky days and golden winter light that gives South Africa, and South Africans, such a warm glow.

While it’s used for families, parties, and weddings, this would be a super corporate conferencing location – the space to come together, and enough team building activity to get outdoors when it all gets too stale and stuffy. And when after too much strategy at the end of the day, enough Conradie wine to drown out the management speak until your heads hit the pillow. 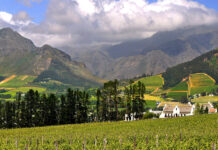 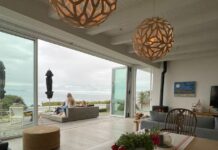